Back in 2019 I built a small storage server for my home needs. Basically I store my music, movies, ebooks, and image collections here, enabling the use of DLNA to watch them on my TVs throughout the house.

Just the other day, I finally got the notice that I am running low on space. To be clear that threshold is any remaining space under 1TB. As of this writing I am down to 1020.7GB of storage space left on this single server. Time to plan for expanding my storage!

To move forward it is always best to know where you are starting.

My storage server currently has 5 drives. 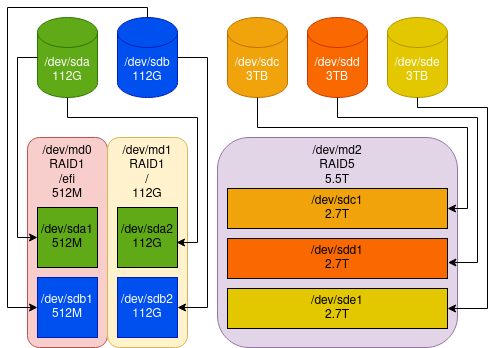 I expected to want to grow my DLNA library storage space over time, as such I implemented the following LVM configuration. 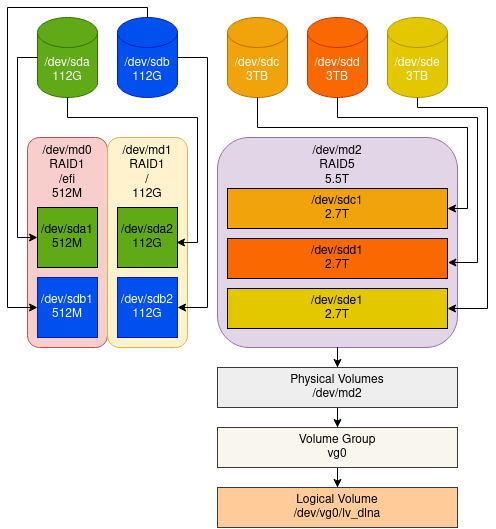 All this work results in a filesystems that resembles the following: 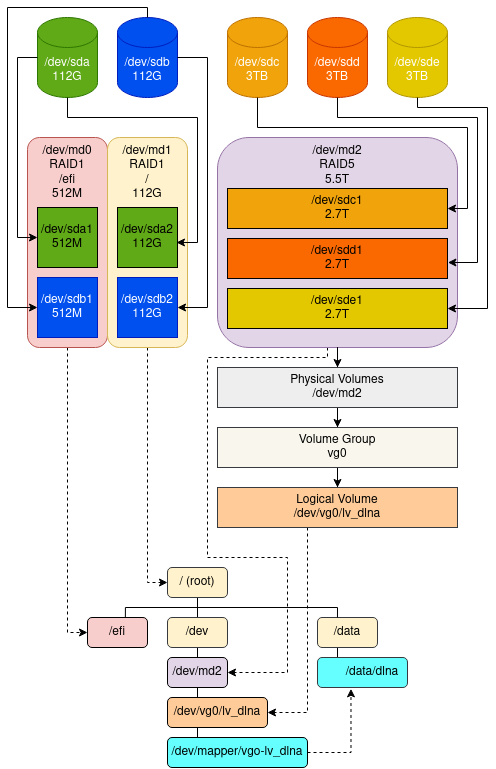 Now I could have just made the LVM mounted at /data/dlna available across the network via NFS, but historically it has proven to be painful to manage, and drops often enough to really just irk me. Most importantly, it has issues with multiple writes. To solve all these problems, I implemented GlusterFS. 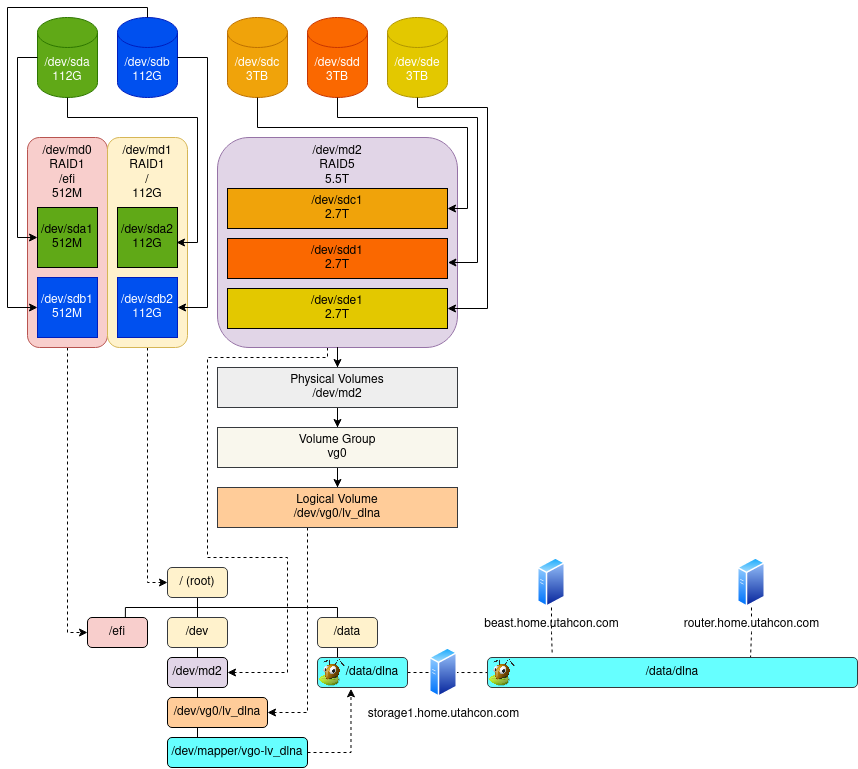 I simply added /data/dlna as a brick in GlusterFS, and now I have a network filesystem that I can mount on my personal workstation beast as well as other endpoints. As of now, this is not exposed to the internet at large, but there are options I have considered for doing exactly that, but that is for another day.

There are lots of options for adding more storage to this scenario, and I would love to explore each of them, alas time and money come to the rescue. Whose rescue? Mine, my wife will kill me if I go too overboard. So what are the real options available to me?

All of these options are actually really easy to implement, and each comes with its own pros and cons (noted above).

The first option is to add a drive to my RAID-5 at /dev/md2. Unfortunately I have used all the onboard SATA connections, and so I will have to utilize a PCI slot. Looking at Amazon and Newegg, a 4-port 6Gbps SATA 3.0 card is going to run me $30-100. I don’t specifically need hardware RAID support, as I am doing my RAID at the software level (right or wrong). 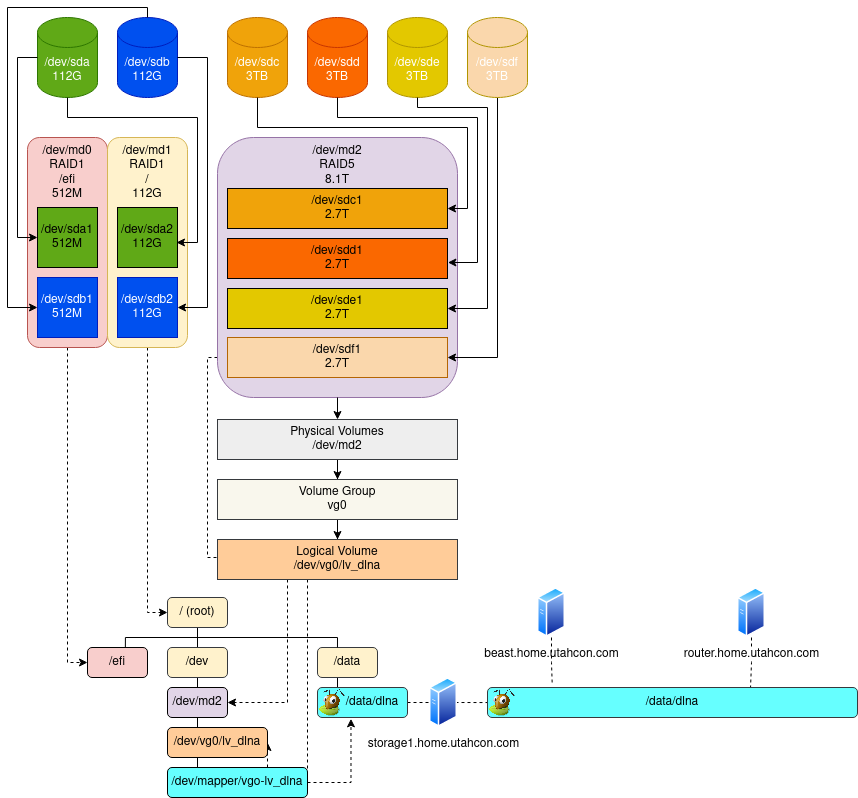 I will need a new drive as well, that is another $45 for 3TB. This will boost my overall storage to ~8TB immediately, and assuming I keep popping 3TB drives in, eventually ~18TB can be had through this design. This is then expandable by adding more PCI cards, and more drives.

All-in-all this is looking like a simple $100 to add ~3TB of space with plenty of growth space.

The next option identified is to expand via LVM. The advantage here is I don’t have to touch the existing RAID-5 at /dev/md2 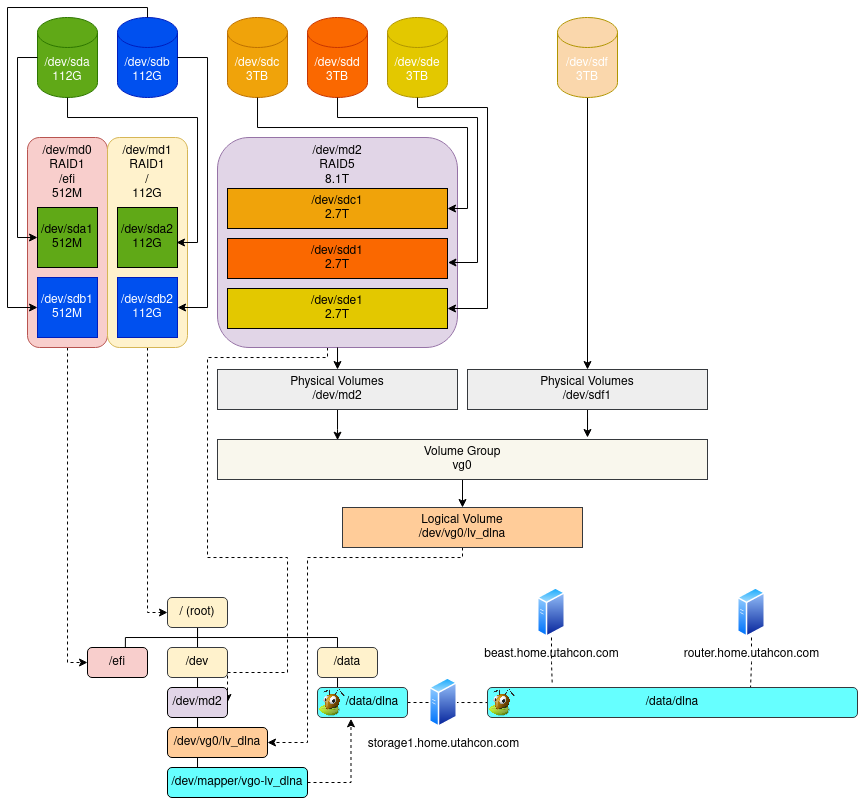 Again, I have used all the available SATA connections on the motherboard, so I am going to have to get a PCI expansion card for adding more drives. We’ll select the same card, and forego the above addition to the RAID. Instead, we will partition and format this drive as follows for LVM.

The biggest downside to this option is unless I am adding 3 drives, and another RAID configuration, I am not going to have parity or striping on this drive, and it becomes a single drive failure. As a result, I am going to skip this option.

Add a new RAID to the LVM

The third option I have decided to consider is adding a new PCI card, at least 3 new disks, and creating a new RAID, and expand our LVM. 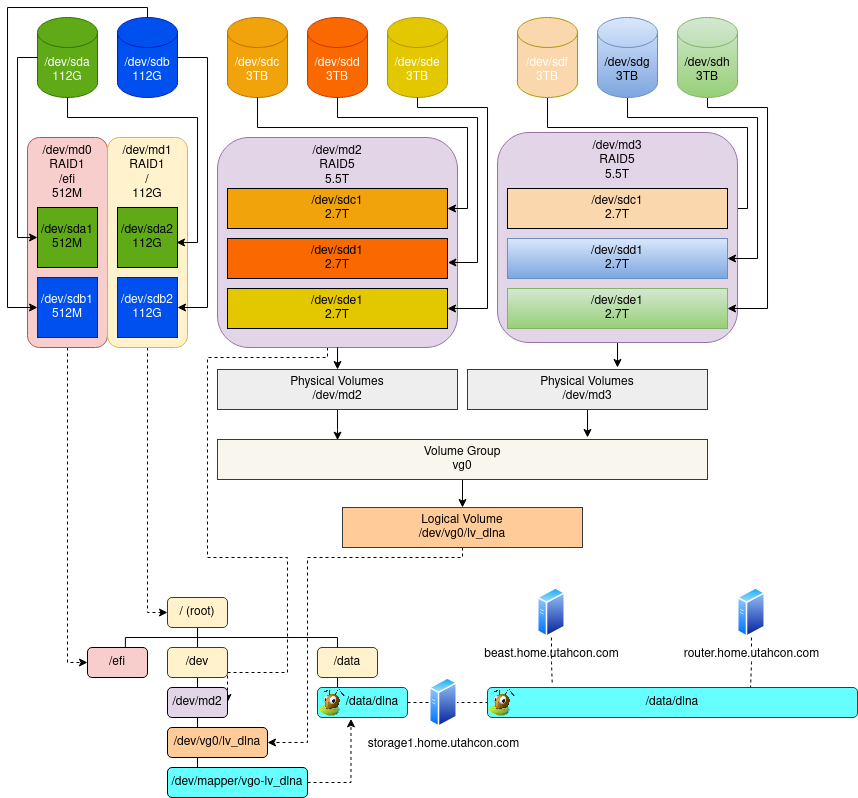 Again, this option requires 2 additional disks be added to the configuration. This causes the cost of this to increase about another $100. Another caveat here is the convenience of not touching /dev/md2 is we lose capacity by creating overhead for another RAID configuration. So we are going to pass on this option as well, at this time. 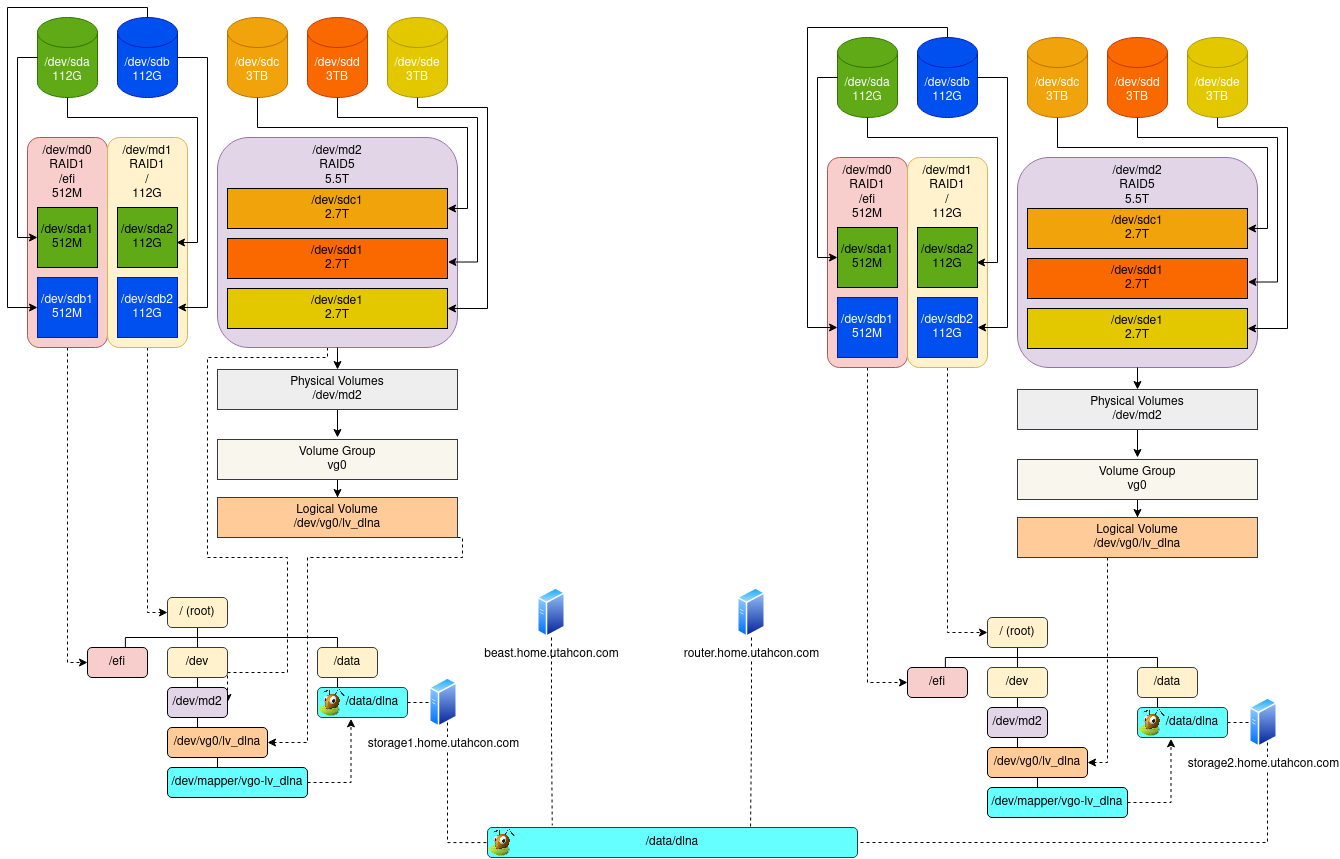 While the complexity of adding a server, and thus a GlusterFS brick is not all that high, the only real benefit I get from this approach is that my original storage never goes offline.

Having weighed all these options I think I am going to go with option 1 Add Space to Existing RAID. The cost is about $100, and will give me room to grow not just one more disk, but up to four more, for a total of 7 drives. For added benefit I am going to add the 5th disk, and simultaneously migrate from RAID5 to RAID6. This will cost me overhead, but it will buy me and addition drive failure. I will report back when the work is done.